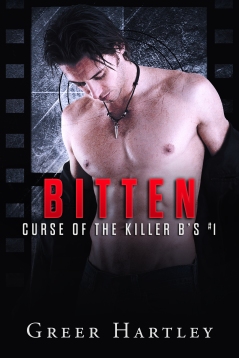 An old-fashioned movie theater with a strange secret. A jilted, pissed-off girlfriend. And a smoldering supernatural hottie to die for.

Being stuck doing late-night clean-up alone at The Killer B’s, the movie theater where she works, is a trial Lizzie Sharpe could really do without. She just wants to finish her work, go home, and forget about her crappy day. But The Killer B’s hides a very interesting secret, and Lizzie isn’t as alone as she thought.

When the hot dude from the movie Bitten By The Vampire appears out of nowhere and says he wants her, she’s understandably doubtful. But vampire Vlad is sexy and persuasive, and by the end of the night, Lizzie is going to discover there are far worse things than being BITTEN by the vampire.

Lizzie Sharpe was seriously pissed. When she got her hands on her — soon-to-be-ex — boyfriend, that motherfucker was going down. And not in the good way.

Bad enough that he’d left her to do the after-the-late-show clean-up all by herself. But doing it so that he could go off and screw around with that slut Sheryl, as if she was so stupid that she wouldn’t be able to figure out what he was doing, was just the icing on a craptacular fucking cake.

She snatched up a large drink cup, still half-full, and pitched it into the garbage can at the end of the aisle.

Another cup went in the same way.

One of these days she was going to learn not to be such a fucking doormat.

She bit back a growl and gathered up a bunch of empty popcorn bags, then stormed over to the garbage can and shoved them in with far more force than was necessary.

It wasn’t even that she disliked her job, or objected to the late-night clean-up, because she didn’t. Her job at The Killer B’s (‘The Very Best In Sub-Par Entertainment’) was, if not the best job she’d ever had, then at least the most fun. It was just that, at that particular moment, a fun job did not make up for having a cheating, douchebag of a boyfriend.

No, not boyfriend. Ex. Chip was very much her ex-boyfriend, even if he didn’t know it yet.

She grabbed the garbage can and dragged it down to the next row of seats, and was just about to start collecting more cups, when a hint of movement from down at the front caught her eye.

Surely she was dreaming. She blinked and looked again, and no, not dreaming. There was actually a guy standing at the bottom of the theatre, dressed just like the Dracula from the crappy movie that had just finished playing.

He was probably a huge dick.

As if her night hadn’t been bad enough, now she was going to have to deal with some ass-clown who thought it was fun to play dress-up.

A tiny part of her actually hoped he was a dick, just so she could have the pleasure of opening up a can of whoop-ass.

She put her hands on her hips and stared down at Vlad the Impostor. “Seriously?”

He looked up, regarding her with dark, solemn eyes, and said nothing.

“My name is Vlad Dracula,” he said, with a bizarre accent that sounded half-British and half-Transylvanian. “And you are?”

Of course it was. “I’m Lizzie,” she said without thinking, then immediately regretted it. The last thing she needed was some crazy dude knowing her name.

She cleared her throat and tried to look pissed-off and in-charge, but wasn’t quite sure if it was working.

The pissed-off part was easy enough, of course — the loathing she felt for Chip was glowing in her chest like a star about to go supernova — but in-charge would have been so much easier to channel if the wannabe-vampire nimrod wasn’t so damn sexy.

“You don’t actually think I’m going to buy that, do you?”

“Buy what?” He leaned forward, his eyes earnest. “I’m afraid I don’t know what you’re talking about.”

“I’m talking about this crazy get-up you’re wearing. Do you really think, even for a single, fleeting second, that I believe you’re a centuries-old vampire?”

He jerked back, startled, and a wary expression crossed his face. “You know about that?”

She couldn’t fight off the eye roll at that, despite the childish, and admittedly foolish, belief that her mother might be right and her face might one day stick that way. “Duh. Everyone knows that.”

He looked around himself nervously, as if Abraham Van Helsing was going to materialize out of thin air and drive a stake into his chest. She almost laughed, but managed to hold it back, if only for the fact that it would ruin her stern, in-charge facade.

“I already told you who I am. And as for the other, no one let me in. I’m not actually certain how I came to be here, I only know that I don’t wish to leave quite yet.”

“Because I would have you.”

Have her? Have her? He couldn’t possibly mean… But he kind of looked like he did. And she would have been lying like a cheap rug if she said she was totally against the idea of having him. But there was a big difference between thinking those thoughts in the privacy of one’s own brain, and actually having the lack of couth to say them out loud.

“Your blood calls to me.” He drew in a deep breath, his eyes drifting closed in what looked suspiciously like euphoria.

That was more than a little creepy. And, also, maybe just a touch sexy? But there was no way in hell her inner feminist would ever allow her to admit that last part.

“The only thing any part of me is going to be calling to is the fucking cops if you come so much as a step closer.”

“Yes, you do.” He sniffed the air again and let his eyes trail pointedly down her body.

Okay, so if she was being honest with herself, maybe she did want him a little. He was insanely hot, after all. Not some hard-body douchebag like a certain ex who would remain nameless, but lean and fit and refined. He also had a commanding air about him that was having a strange, and not entirely unpleasant, effect on her body.

And despite the way this guy was indulging his inner geek with the cape and fangs, his outer hottie was really fucking hot.

It wasn’t as if she’d never fantasized about christening the theatre before. Of course, back when she’d had those thoughts, it has always been Chip who featured in her fantasies. But that pretty much made the opportunity before her absolutely perfect. After all, the only thing better than a little revenge sex was having it with the sexiest man she’d ever laid eyes on. And there he was, standing right in front of her, just waiting for her to say ‘yes’.

Lizzie took the stairs slowly, stopping on the last one before the bottom, so she could look Vlad in the eye.

Jesus Christ. Vlad? Hopefully he wasn’t one of those guys who got off on hearing his name screamed out at the heights of passion.

“Then we would be very much in accord.”

“And what would we do about that accord?”

He frowned slightly, as if suddenly unsure of his grasp on the English language. Or hers. “Well, I should think that would be rather obvious.”

“Spell it out for me. I don’t like surprises.”

The frown deepened, as if he’d developed doubts about her intelligence as well as her capacity for communication, but she wasn’t backing down.

One time, before Chip, there had been a very brief thing — not even a thing, really, so much as an attempted thing — with a deceptively mild looking fellow from the coffee shop around the corner from The B’s. He’d been sexy, in a buttoned-down, intellectual way, and the night had been progressing in a very promising fashion. She’d been down to her bra, and was in the process of shucking her jeans, when the sound of a paddle cracking against a leather-clad palm had turned her libido into an icicle.

She couldn’t possibly have fled the place faster if it had been on fire. And she’d sworn off coffee for the six months it had taken for Paddle Boy to find a job elsewhere.

But she’d learned a very important lesson that night: the clothes stayed on until all the kinks came out of the closet.

“Well, first we would kiss.”

That sounded good so far.

“And then I would… touch you.” He reached out and traced a finger along her collar bone in a knowing, suggestive way.

That was even better.

“And then we would… couple.”

Couple? Seriously? This guy was really into the whole vampire role-playing thing. If she didn’t know any better, she’d almost believe he really was an 18th century Transylvanian Count.

Well, an 18th century Transylvanian Count with a bizarrely British accent. Kind of like the actor who played him in the movie, when she thought about it.

“And that’s it? Just… coupling? I mean, there won’t be any funky monkey?”

He drew back, clearly appalled. “There will be no monkeys of any kind.”

Lizzie pressed her lips together and prayed she wouldn’t burst out laughing right in his face. “Relax,” she said, once she finally got a grip on herself. “I didn’t mean actual monkeys. It’s just a saying.”

“So you’re saying…” He paused and frowned in thought. “You’re saying that you’re not into kinky coupling?”

He nodded, looking pleased with himself. “I understand. There will be no funky monkey.”

“Excellent. We have an accord.”

For just a second Lizzie thought he was going to shake her hand to seal the deal, but then his fingers were sliding into her hair and he was kissing her.

Unleashed (Curse of the Killer B’s #2)

In BITTEN, Lizzie Sharpe discovered the strange and sexy secret of The Killer B’s — that in the right place and at the right time, the theater can magically bring characters to life.

Sexy, handsome Vlad was everything Lizzie could have wanted in a man. Or a vampire. But their one incredible night together left Lizzie wanting more of the same. And she intends to get it.

Sweet, attentive Grady is a man of few words and infinite sexual prowess, and he wants nothing more than to give Lizzie every bit of pleasure that her heart desires. But his gentle exterior hides a fiery, undeniable passion, and before the night is over, Lizzie is going to going to find out what happens when her lover’s inner animal is UNLEASHED.

Unleashed (Curse of the Killer B’s #2)

Ghosts of Christmas Past